New York Times metrocard was enclosed in specially designed envelope and into some newspaper distributed across New York city. Official circulation is 1,000. That is the main reason this card is so rare. In addition, most customers who found that card inside newspaper used fare encoded into metrocard and through it into garbage adding to initial shortage of cards. At the same time, there are known cards with different expiration dates which add doubts that actual circulation was just a thousand cards, it could be more than that. Metrocard was inserted into special envelope that could be used to send request for subscription. 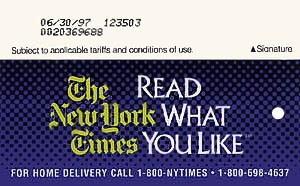